Satire can be one of the trickiest elements to represent and there is a fine line in providing a commentary on an issue, or becoming self indulging with it. Retro City Rampage takes us back to the 80s but this is one time traveling trip I would like to stay home.

The story of Retro City Rampage is that you play as Player (no, really that’s your name): a low ranking henchman for a super villain. When a time traveling phone booth drops in front of you, you steal it and take it back to the 80s and become trapped there. Requiring you to go through scene after scene of 80s references and game inspirations to get back home.

The pitch of the game is imagining the original Grand Theft Auto as a game released in the 1980s. You have a complete pixilated city to explore while going on missions. The missions themselves are all based on different parodies of 80s games, movies or TV shows. One minute you’ll be fighting enemies with a sword and shield and then you’ll be sneaking around in a cardboard box.

As you’ll play, you find new costumes, vehicles, weapons and even real game inspired upgrades like speed shoes and a flying suit. Unfortunately with everything that’s in Retro City Rampage I have to ask one question: “Where’s the Beef?

The problem for me with Retro City Rampage is two-fold. First is that the humor of the game fell flat for me after a few minutes of playing. 80s references fly quickly on and off the screen and in the most heavy handed way as possible. The attempt at satire is less about Rockstar’s style of providing social commentary and more about Family’s Guy’s random cut-away gags.

The concept of providing a modern day view on 80’s game design and references is an interesting one and something a bit too big I think for this type of game. While many indie designers use simple graphics styles and engines to provide a source for their unique gameplay, Retro City Rampage’s gameplay fits in line with its humor: simple. 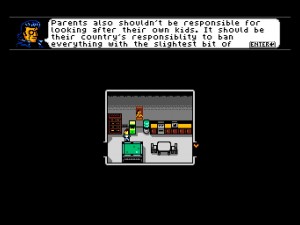 The many jokes of the game come off as lazy instead of as satire.

Missions have you driving from one point on the map to the other and fighting off waves of enemies in the most primitive way possible.

Hand to hand fighting was a chaotic mess and pales in comparison to the games from the same era that Retro City Rampage takes place in.

The game features many level designs from classic games like Smash TV, Teenage Mutant Ninja Turtles and Contra for example.

But instead of trying to do something different, the gameplay feels even more restrictive then the games that the sections were inspired by.

One mission has you becoming a Ghostbusters parody and gave me high hopes for something similar to the older games or even just more action. Instead, the entire level was shooting wave after wave of nondescript enemies with a modified flamethrower.

Last year’s free game release of Abobo’s Big Adventure which also took a skewed look at retro games did a much better job. The game featured a lot of the levels and music from those games, but with a different character twist.

The only nice thing I can say about Retro City Rampage is that the soundtrack for the game is great. Featuring tracks reminiscent of classic NES chip tunes and stands out above the rest of the game.

I hate to come down on a game like Retro City Rampage as it was created by one guy. But in today’s indie market where we have small teams putting together great games at reasonable prices, I have to give thumbs down to this one. $15 is definitely too much for Retro City Rampage and rose tinted glasses aren’t enough to make this nostalgic trip worth taking.