Reactive stealth design is about the player having very little impact and forced to rely mainly on hiding and line of sight to avoid detection. In other words, they are reacting to the environment or enemies.

Some examples would be Amnesia, Haunting Ground and of course Outlast. In these types of games, stealth is usually tied to getting around specific areas or completing an objective without being detected by whatever is out to get you.

Detection in these games is very binary in the sense that the enemies are usually either chasing you or hunting after you in the given area. Your actual means of interacting are usually kept very basic and most often you cannot directly engaged with any of the enemies that are hunting you.

Some games may give the player the means of temporary stopping the enemy which is usually done through something in the environment like closing a door but this is a situational measure and cannot be done at will.

In these games, the designers are trying to make the player feel very weak which is supposed to be tied into the horror if the game is from the horror genre. In the past, action developers liked to have stealth levels where the character was disarmed or captured and had to escape from some place.

The problem for me with reactive design is that I don’t feel like I’m actually being stealthy, but doing a little puzzle. How do I get from point A to point B without being caught? And if I am caught, then it’s usually quicker to just die and restore the game from an earlier checkpoint. Enemies are usually designed around a limited AI patrol pattern which can be exploited once figured out. 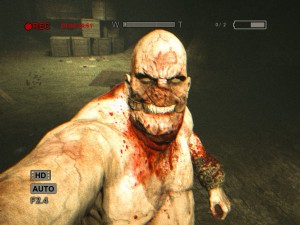 In reactive stealth games, the worse thing you can do is get caught by whatever is chasing you.

A great example of a game making reactive stealth tense and that was the additional quest in Amnesia where if you were killed the game ended.

While this certainty added weight to your actions, not every game can be designed around one and done design. Another example would be the orphanage level from Thief 3. Here, the player must still use stealth, but they are dealing with ghosts who are immune to their weapons that they must sneak around.

Another issue with reactive design is the as mentioned “stealth sections” in action focused titles. For many players it feels like the designers flipped the script and removed all the player’s options in favor of arbitrary restrictions.

This is where I feel a lot of people don’t like Payday 2’s stealth system, as the active gameplay of shooting is replaced by reactive stealth play. You can’t really distract guards as your only options will lead to you getting caught or wasting a pager. And a lot of it is just you reacting to guard patterns which can get very boring.

The limitations of reactive stealth design are why I like games built around active design.

Active stealth design is where the player can influence how they are sneaking around through a variety of means. Here, instead of just reacting to the enemies they are able to mess with or alter the enemy’s detection.

Some examples would be the Thief series, Batman Arkham Asylum, Hitman and of course Metal Gear Solid. In each of these games, the main character is powerful in a one on one situation but would be taken down quickly if outnumbered (or in Batman’s case with guns.)

The player’s job is to either get through an area without being caught or figuring out a way to perform an objective while dealing with overwhelming odds.In a reactive game the player cannot impact the enemy, but active stealth lets the player mess with or alter the enemy’s search. 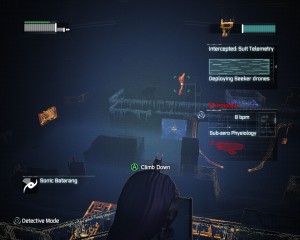 Active stealth lets you be more proactive in avoiding detection and dealing with any threats you come across.

Making noise as distraction, taking down guards, using disguises etc, these are ways that the player actively makes their own way through the level as opposed to waiting. Instead of each segment feeling like a puzzle, there is a lot more hands on play for the player.

It’s important to note that games built around active design usually have strong characters or someone who wouldn’t be hiding out of fear. These are characters who hide only to get the drop on an enemy or who are on a mission.

Another important part about active games is that because the player has more control, designers usually put in more than one form of detection such as having both lighting and sound or enemies that can detect the player in different ways. The reason is twofold, one to impose restrictions and challenges on the player and two for the player to work this into their solution for getting around.

In the Batman games, enemies start out by only detecting Batman if he is on their same elevation plane. But eventually enemies will be able to spot Batman while he’s perched, blow up areas for him to hide and even jam his detective vision. This prevents the stealth play from getting routine and adds more challenge as the game goes on.

In Metro Last Light, stealth is all about lighting. The player’s watch lights up when the player is able to be seen and they are challenged to move through areas with overwhelming guards. If spotted, the player can engaged in a fire fight but since bullets are currency, you really want to sneak up and knife enemies or just move along. 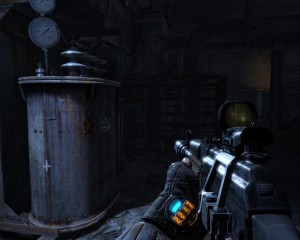 Metro Last Light isn’t a pure stealth game, but features a simple active stealth system to give the player some control when sneaking around.

To help the player, they can turn off lights either by blowing out lamps, hitting switches or disabling the fuse box. This allows the player to move around easily or distracts guards to come investigate.

Active design is not without its limitations, as giving the players too many tools and tricks to use can render stealth repetitive after awhile. For example the player can make use of the same techniques over and over again in the Batman games. Thief was interesting in how the designers figured out a way around this by imposing special limitations based on the difficulty level — raising the amount of loot needed all the way up to telling the player that they can’t kill any guards.

While Batman with the stealth challenge levels asked the player to perform specific stealth takedowns instead of just performing the same over and over again.

When it comes to interesting design, active stealth play is superior as you have a lot more options for making challenging segments or enemies. And the perfect example would be the Mr. Freeze stealth battle from Arkham City which is still the standard for what a good boss stealth fight could be.

Stealth design has changed with the times and we’re now seeing games swing in either direction: As horror games of reactive stealth or action titles with active stealth.  As I’ve said, for me I prefer games that are more on the active side as they offer deeper gameplay than just hiding. But it is possible to give the player ways of influencing stealth while still keeping them weak, delivering tense gameplay without it becoming tedious.

It’s all about delivering the right amount of strength and weakness to the character. Keeping them weak so that direct confrontation should be avoided, while giving them enough power to influence their stealth or mess with the enemies. Going all in with making the character weak and unable to do anything can work to deliver a scare or two. But the player will eventually get tired or acclimated to the same routine.

Essentially the difference between reactive and active stealth can be broken down into if you want a weak or strong character and in turn how the player will act in the game. Good design is finding those balances so that strong characters can feel weak while a weak character can have a moment of power.