The (Bio) Shock of the AAA Game Industry

Last week a news piece that surprised everyone was revealed: Irrational Games is being closed following the release of the final Burial at Sea DLC. To say that this news was unexpected would be an understatement and is something that I really want to talk about.

To preface this, I want to point out that there are not a lot of facts surrounding any backroom deals between Ken Levine and 2K Games and what I’m going to talk about is strictly my opinion. With that said, here are the facts that we do know.

2K Games and Ken Levine have reached a deal where Irrational Games as we’ve come to know it is closing.  The majority of the people there are being let go, except for 15 of Ken’s choosing who will join him at a new studio where he can work on smaller games with a flatter organizational structure.

This really comes at a blow not only to PC gaming, but to the AAA industry. Irrational Games was one of the few remaining “Old Guard” of the PC industry from the 90s. Besides making the now famous System Shock, they also did Freedom Force, which Kenneth and I loved before their big breakout into the mainstream with Bioshock.

The studio was always known for making very creative and imaginative games, but not best sellers. When we talked with Joe McDonough who worked at Irrational, he told us that while Freedom Force 2 reviewed well, it did horribly on the market.

Bioshock was really the game that put Irrational on the map for not just the PC audience. This was a game that got massive exposure thanks to its unique setting, art style and very well produced advertisements. And it really propelled Ken Levine and the rest of Irrational Games to be big players in the industry of the likes of Sid Meier, Hideo Kojima and others.

When Bioshock Infinite went into development, I’m willing to bet that 2K effectively gave Levine and co a blank check for Infinite. This is where the story becomes a bit muddy as rumors are hinting at a disorganized development and Levine making constant revisions to the game.

Leading to a game that was one of the most successful games of 2013, however it may have not been worth the cost of development. Again this goes back to the big problem that I and previous podcast guests have talked about; the AAA market is becoming less and less sustainable.

According to rumors, Bioshock Infinite cost an estimated 200 million dollars, between development and advertising. I still can’t imagine any game, even one from a prolific series like Bioshock needing 100 million dollars worth of advertising. Considering word of mouth and the prestige of the studio should have helped driven sales alone.

Moving on we come to the other part of the discussion: Ken Levine’s actions and how they have created a debate in of itself.

Looking around the internet over last week, there were two prevailing opinions about Ken Levine that were being said.

One that he acted disrespectful to his team with how he let the studio that he helped become popular be taken apart. And that it’s not right for him to let the studio close but remain with 2K along with a handpicked group of people.

Opinion two was that Ken was making the best of a bad situation. If the studio wasn’t able to be salvage then he did what he could under the circumstances to keep making the games that he wants to while helping everyone that he could. 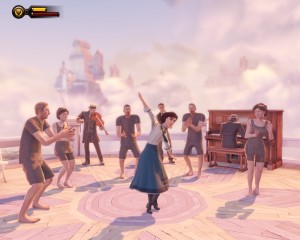 Bioshock Infinite was a tremendous success in the public’s eyes, but apparently not in 2Ks

For me, I’m somewhat between the two as there were a couple of red flags raised in my mind when I read the news.

I would have expected someone like him to instead move to the Indie scene where he would have complete freedom to make anything he wishes. There’s also the fact that kickstarter has become big since he started making Bioshock Infinite. I’m willing to bet that if he put up a kickstarter for a new company and game idea, that it would be funded very quickly due to his name recognition.

The other problem is the fact that Irrational Games had to be shut down in the process. Now again, I have no insider knowledge nor do I know Ken Levine personally, but I don’t know what impact he had on Bioshock’s development.

As director on the project, that could mean a lot of things. He could have just written the story and base mechanics, or he could have had a small role in every part of the game’s development. But still, Bioshock Infinite was not made by one man and it’s obvious that Irrational had talent working there.

Not only that but the brand recognition that the studio built up being one of the few studios to make a huge presence both on the PC and console side was huge. To just say that the situation was unsalvageable and end everything seems like such a waste in my opinion.

Call of Duty worked as an annual series due to a focus on specific game mechanics. But Bioshock’s themes and art direction would require far more time and money to work right.

There has been talk about 2K wanting to continue the Bioshock series without Irrational, but I don’t know if it’s possible to have a similar case like with Call of Duty’s development where different studios could put out products that the fans would want.

That is actually the main pull of Bioshock: A unique AAA experience that is unlike other shooters out there.

At this point we may never truly know what happened over at Irrational Games but we can say that a great studio has been lost. It remains to be seen what will be Bioshock’s fate now and that of Ken’s new studio. However there are two things for certain, I guess Kenneth and I can finally put to bed the hope of seeing a Freedom Force 3 anytime soon.

And that if the AAA market is such a place that an almost universally praised game like Bioshock Infinite led to its studio being closed, then something is definitely wrong there.

Should Free To Play Be Retired?