Pinball has been a hobby of mine since I was younger, however the decline of the arcade industry has put a major dent into it. But while arcades are no longer viable, digital pinball has grown over the years.

Zen Studios has made a name for themselves with their pinball titles: By creating uniquely designed digital pinball tables. With the recent release of Pinball FX 2 on Steam, I got in touch and ask them some questions about the development of their pinball platform.

The following interview was done with Neil Sorens: the creative director for Zen Studios

1. I’ve been examining video game design for over 15 years, but while being a pinball fan, I’m not familiar with the intricacies of pinball design. As a “Pinball connoisseur”, in your opinion what distinguishes a well designed pinball table from a poorly designed table?

Good flow is very important. The ball should move around the table smoothly and naturally in the hands of a skilled player, and the simple challenge of batting the ball around with the flippers should be enjoyable in itself.

Variety is also a major factor: a variety of shots to make; a variety of playfield elements; a variety of modes to complete; and a variety of sights and sounds to trigger. Player guidance is also necessary – it should be clear to the player what to do.

2. Looking at the evolution of Zen’s table design, your team has gone from creating tables that would not be out of place in an arcade, to designs that physically could not exist. Has this growth been a part of Zen’s development from the start, or did it happen naturally over time?

A lot of it is a result of the table licenses we’ve gotten. In order to make the most of them, we’ve added things like Tie Fighters flying around and superheroes brawling with each other.

Generally, we limit the liberties we take to elements that are purely visual and don’t affect the actual gameplay, or that could be done via other means on a real pinball table but just wouldn’t look as cool or would be incredibly expensive to construct.

There are occasional exceptions, such as the modes that change table friction on the Wolverine and Captain America tables, where from a gameplay standpoint it just wouldn’t be possible at all on a real table, but overall we try to keep true to the electromechanical nature of the game.

3. Without spilling any trade secrets, could you walk us through the general thought process of developing a table from scratch?

We start out by indentifying key elements of the table’s theme and brainstorming ideas for layouts, major playfield elements, and game modes that would fit that theme. Once these ideas have coalesced into a solid concept, we build the basic geometry and work on the flow of the table, making changes to the geometry as needed. 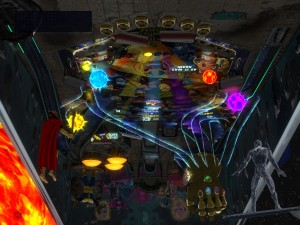 Many tables feature missions that change the playing field drastically.

Once the modes and features are designed, the designer starts scripting and testing the table logic. Then we start adding and tuning the scoring, a process that will continue through beta.

Meanwhile, the asset production is still going on, and we’re writing table text and voiceovers, sending that for localization and recording, composing table music, and so on.

And of course in the alpha and beta stages we finish balancing and bug fixing, lock down the art assets, and all that sort of finalization stuff. The whole process takes a team about 6-8 months.

4. Continuing from the previous question, how much of a difference is there in the design process when you don’t have to factor in the physical limitations of a pinball table?

It’s hard to tell, since we’ve never made a physical table before! Certainly, there is a lot more freedom when you don’t have to worry about how much a playfield toy would cost to manufacture or whether the electronics layout on the underside of the table is going to fit.

5. If there is one detail that can make or break a computer pinball game for the hardcore, it would have to be ball physics. As someone who is not a pinball expert, I’m curious about what kind of work goes into developing the physics for a simulated pinball game. Is it a matter of simply matching the attributes of a real pinball and flippers, or do different boards have different elements to them?

There are a ton of elements that all have to work together to create that feeling of real pinball: flippers, slingshots, bumpers, table incline, and even static playfield collisions affect people’s perception of how realistic the physics are. 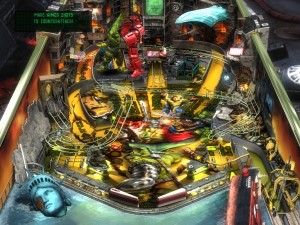 Expect to see famous characters on the licensed tables

In addition to all that, we also model the friction and elasticity of different types of materials. We do tweak the strength of flippers, slingshots, etc. for individual tables based on the table design.

And in some tables, we mess with ball friction, such as in the Adhesive X mode on the Captain America table and the Fastball Special mode on Wolverine.

6. This next question is in regards to your licensed tables. When it comes to game design and working with an IP, the IP holder usually has final say and input on the development of the title. With pinball design, does the IP holder have any control on the table design, or require specific elements to be included?

Yes, the IP holder has final say on every element, though they typically focus more on things like visual fidelity to the source material than on gameplay design. However, Marvel, Lucas, and PopCap were all fairly hands-on with the design, too, as the guys we worked with there all came from gaming backgrounds.

7. As with Pinball FX 2 on the consoles, Zen has promised continued table support for the foreseeable future. From a development standpoint, what is the usual turnaround time from concept to release on one of Zen’s tables?

It’s usually about 6-8 months, though tables can get delayed depending on what our priorities are at the time, contractual issues, and so on. We have to develop multiple tables in parallel, or we’d never produce enough to keep our ravenous fans satisfied!

8. At this point it stands to reason that Zen likes Pinball. Were there any real tables that were your favorites that were an inspiration for Zen’s tables?

Yes, we have a bunch of real tables in the office and generally look to the complex, widebody, solid state tables of the 90s as a model. Some of our personal favorites are Addams Family, Twilight Zone, Star Trek: The Next Generation, Indiana Jones, Judge Dredd, Doctor Who, and Fish Tales.

I also really enjoyed some recent Stern machines such as AC/DC and the Tron: Legacy LE table with the neon-like fiber optic lighting.

9. Pinball FX 2 like the original wasn’t an actual pinball game per-say but was developed as a platform for pinball tables. Do you see Zen moving on to a Pinball FX 3 at some point?

Yes, we have tons of ideas for a sequel! We have all this content we’ve made over the last 3 years, we want to give people new ways to enjoy it and reasons to go back it again.

10. Growing up I used to play pinball games like Super Mario World, Addams Family and Hercules and thinking that pinball design was at the peak of development. Looking at Zen’s table design, my inner child’s mind has been blown. Where do you see the future of developing table designs now that designers are free from dealing with physical constraints?

Obviously, it’s very liberating not to have to worry about how much it will cost you to build that cool playfield toy into every one of your tables. But at the same time, we have to stay true to the spirit of pinball as an electromechanical device, or we’re just making a weird physics-based video game.

We’ll keep coming up with fresh ideas for our pinball designs, but I wouldn’t expect us to make the next Flipnic.

Thanks again for taking the time to answer these questions and good luck with the continued development of Pinball FX 2.