And we’ve come to #1 and for the first time on Game-Wisdom: Wrapping up a series of posts in a timely manner. The FPS genre for me was similar to the JRPG genre in the sense that I fell out of love with it in the 00s. As more multiplayer focused shooters started to appear I lost interest in the competitive scene.

But just like with the JRPG genre and Shin Megami Tensei: Nocturne, it would take an unconventional game to bring me back.

Stalker, developed by GSC Game World was an open world FPS title. Similar to open world games like Far Cry 2: the entire world was mostly open from the start and allowed the player to explore. You had a main quest, but were free to do side quests or wander around.

The game took place in an alternate history where the Chernobyl nuclear reactor again suffers a critical problem causing the entire area around it to become irradiated and mutated and reclassified as “the zone.”

The government does its best to keep order while different groups fight it out for control. All while mutated plants and animals now live off the land or any unsuspecting humans they catch.  The reason everyone is there is for artifacts: Objects that have become irradiated to the point of mutating and now confer both positive and negative effects to the wearer.

The player is a “Stalker”: a freelance group that their only affiliation is to themselves, or to someone with enough money. The player is wounded at the start and loses their memory. The only clue they have is a name tattooed on their arm: Sterlock.

Stalker was an interesting game in terms of design as in my opinion it is one of the purest combinations of twitch or FPS skills and RPG design. To understand we need only look at the 2nd closest: the Borderlands series. In Borderlands the player relied on both traditional FPS skills with moving, shooting and aiming, while contending with the RPG nature of leveling up.

There is abstraction at work based on the level of the shooter and the one being shot: If you are a far higher level than I, then I’m going to do less damage regardless of my gun or general ability.

In Stalker there was no abstraction, experience points or levels. Instead the RPG design was built into the equipment you can use. Guns, items, suits and so on all came in different varieties of condition, rarity and general attributes. At the start of the game you are stuck with a basic 9mm pistol, some bandages and basic clothes.

In a sense Stalker had gating mechanics built into the equipment. For example a few minutes in you’ll come to a blockade of soldiers with assault rifles. With your basic gear you won’t be able to do much against them without suffering heavy damage. However, if you come back with your own assault rifle or even a machine gun, things could go differently. 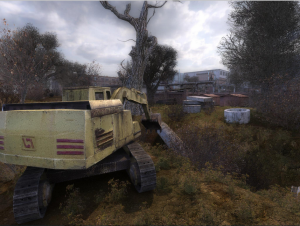 The environment was detailed, depicting the damaged landscape.

The further you play, the more powerful you became thanks to the equipment you found, which in turn supplemented your natural ability.

Later on you’ll be using advanced tactical rifles wearing the latest in experimental suits and wondering how you ever managed at the start.

Helping the player was the excellent gunplay the designers implemented. Every type of gun had a different feel to it and it was such a joy to find a new weapon to add to your arsenal.  I still remember the first time I had a mutant chasing me when I used a double barreled shotgun that caused the screen to recoil and when I looked again, the thing was dead.

Many weapons could be modified such as using different types of rounds or attaching a scope to them. But you had to work for these upgrades as buying items was expensive and the good stuff was always hidden in dangerous areas. And trust me, things got dangerous.

A Hunting We Will Go:

Stalker featured an “A-Life” system: Where NPCs would go about their business separate from the player. You may be wandering around and stumble on a bandit fight, or a pack of mutants hunting for food. Given the size of the zone (about 30 square KM) there was a lot of real estate to explore. With the A-Life system, the player could be assured that no matter where they went there would always be something going on.

As the player explored they would also find anomalies that would indicate artifacts. These anomalies differed based on the artifacts around and could be anything from fire coming out of the ground, to a miniature black hole that could kill them.

Artifacts would give out radiation and would require the player to take medicine or wear stronger suits to counter it. The boundaries of each area were marked by high levels of radiation that would kill the player if they stayed there too long.

Another great part about Stalker was how the game could transition from action to horror based on the player’s location. Above ground the player had to contend with smaller mutants and other humans, but the best stuff was hidden in underground bases.

Once inside, the player would find themselves moving through dark corridors with very little sound, while being hunted by stronger mutants. The transition was so jarring that these sections felt like they could be from another game.

Now despite my love for Stalker, the game was not without its problems, both technical and design. Early versions of the game were full of bugs and general technical issues like crashing and slowdown. The game required a higher than normal (at the time) computer requirements to run properly.

It took a while for the general issues to be sorted and even then modders continued to improve the game, including the Stalker Complete mod that completely re-did the graphics and balance of the game.

The design problems were arguably based on your skill level. Due to the importance of better gear, Stalker was noticeably harder at the beginning compared to other games at the time. I’ve heard from people who gave up after becoming frustrated at the first anomaly. The ending of the game also felt a little flat in my opinion, moving from exploration to corridor shooting. 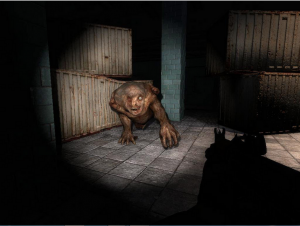 The stronger mutants would show up in dangerous areas and helped add horror elements to the game.

The future of the Stalker series is up in the air at the moment. There were two expansions released: Clear Skies and Call of Pripyat.

Clear Skies was known more for its copy protection while Pripyat was a decent follow-up, but felt smaller and less open compared to the original.

At this time the planned sequel for Stalker was cancelled followed by the closing of GSC Game World. The developers have formed a new studio and last we heard, were working on an online MMO around the similar themes of Stalker.

Stalker: Shadows of Chernobyl remains as one of my favorite shooters if not favorite games and a great example of how open-world gameplay could be applied to a genre.