There are several reasons why we haven’t made a sequel until now. Most importantly, we wanted the next game in the Infinite Space series be as large a jump from Weird Worlds as it was from Strange Adventures. Weird Worlds is also a game that has had a very long life cycle because of its replayability and the availability of mods. Some people who bought the game in 2005 are still playing it on regular basis!

One boost for Infinite Space right now is that we were recently able to re-release Weird Worlds as a fully independent title, and it has found a new audience that will be excited to get their hands on a sequel. For me, this is also a great time to create a new kind of Infinite Space experience because I now have a whole new framework for 3D graphics and sound as a result of working on our previous games (Data Jammers and Brainpipe).

The idea to use Kickstarter simply results from the fact that we want to give the artists some money up front. When it was just the three of us in the past, we’d all work without pay and split the profits later.

2. Besides making video games, Digital Eel is also known for table-top games. Many designers talk about the usefulness of paper prototypes when designing games. Has working on table-top games influenced Digital Eel’s game designs or vice-versa?

Definitely! Not only have we made tabletop games using the Infinite Space universe and content, some of our tabletop designs are influencing Sea of Stars. For example, “Infinite Space: Explorers” has a really fun card-based ship combat system that gave us ideas for how to improve the combat system in the computer game.

3. Reading the gameplay plans on the kickstarter page, one of the big changes from Weird Worlds is having a more active Universe: technology evolving over time, alien ships moving across the map and so on. Given the nature of the series to be designed for short play sessions, how are you fitting all this in?

The short nature of the game doesn’t really prevent any of this stuff, we just didn’t go far enough with it in the earlier games. Weird Worlds does have a few cases of alien fleets moving around (like the Ravian encounter) but it’s pretty rare to run into them.

Mostly the fleets just sit in place. It also resulted in combat encounters in the early game being very hard, while later in the game you could overpower anything you met (because the alien fleets stayed the same from the beginning to end).

What we want to do in Sea of Stars is have the enemies be fairly weak from the outset so you can survive a combat encounter, but reinforce them over time so that they will still be challenging when you have five ships and good equipment.

And if you make someone mad, they might chase you across the map or try to intercept you at a star you’re going to. Events like all-out wars between alien races will be somewhat rare so it’ll surprise you when it happens.

4. Besides the move to 3D, are there any big changes to the combat system with Infinite Space 3?

Yes, there are several improvements we have planned to make the combat even more fun. For example, we have a brand new ship deployment and retreat system that will let you use your star drive to enter and leave combat more quickly as well as keep some of your ships in reserve if you don’t want them to enter combat. You will also be able to decide where on the combat map your ships will be deployed.

5. Since the release of Weird Worlds, there have been several new series that have followed in the Infinite Space series’ footsteps of implementing rogue-like elements in accessible titles (FTL and The Binding of Isaac for example.) Where did the original inspiration for Infinite Space’s design come from considering that it was one of the first games to be inspired by the rogue-like genre.

It’s kind of a long story. We were originally working on a massive 4X strategy game named “Infinite Space” that we started in 1999. After nearly two years it became clear we weren’t going to finish it, so we did some brainstorming on what we could do with this whole universe we had created. Strange Adventures in Infinite Space was the result of that. 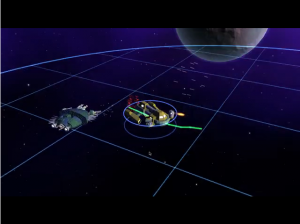 Revisions to the combat system should make the new 3D battles for exciting.

Rich and I were fans of a couple of older games like Starflight and Star Control 2 that were adventure games with features similar to SAIS but they were more traditional “long” games.

We had also worked on an Infinite Space-based strategy board game at this point and liked the idea of a game that doesn’t require too much time to play, so we decided to combine this board game-like quickness with the setting of a space adventure game.

Randomly generating everything was a natural way to make the game replayable. I had been playing Hack/Nethack for many years so I was already thinking of the term “game world” as a set of pieces that can be arranged in any configuration, rather than a static pre-defined map.

6. The mechanic of having a meta-game or content that is unlocked for future plays has gain traction among both rogue-like and traditional design as a way of further adding replay-ability. With Infinite Space 3, will there be any content that needs to be unlocked, or will everything be possible to see from the get-go?

I don’t personally believe in unlocking content for replayability reasons. It introduces a “non- roguelike” end point where you have officially got everything out of the game and don’t have to play it anymore. This is like a traditional “story game” that most people will finish once and never play it again. I think it’s a much better idea to simply have a rich enough game world that you keep discovering new things every time you play.

7. Mods have done a lot to enhance Weird Worlds as evident by the variety listed on the Shrapnel forums. Does Digital Eel have any favorite mods they saw developed for Weird Worlds that you hope will see the transition to Infinite Space 3?

We certainly hope that many of the mod makers will transition to the new game. Things like the new 3D engine and quest scripting system may make translating any particular mod a tricky proposition, but we’ll try to make their work as easy as we can.

Thanks for taking the time to answer these questions and good luck with the kickstarter.