Continuing our look at how realism and game design seem to clash these days, we turn our attention to weaponry. How men and women after picking up a weapon become Rambo… but with a two weapon limit.

In my earlier part about enemies, I talked about how the main character was tasked with taking out an army by themselves. Over the last generation besides seeing soldiers like Marcus Fenix and Master Chief, there have been several regular people thrown into these crazy situations. Characters like Nathan Drake and (rebooted) Lara Croft who may be archeologist by trade, nevertheless become expert killers.

The odd part is how quickly these seemingly regular people go from rarely using a weapon, to having the same accuracy and skill as a marine. In both Tomb Raider and Far Cry 3, both main characters felt very uneasy after their first kill in order to make you feel invested in their growth.

But they immediately go from 0 to 60 and spend the next several hours shooting anything and everything with pinpoint accuracy. Those feelings of remorse were never mentioned again and our vulnerable main character became the titular one man (or woman) army.

I understand that the first time was the most shocking, but you would think that some part of their conscious would say something after they just wiped out 100 men with shots to the head.

Despite what politicians and parents groups say: video games do not train you to use a gun. While they do help with reflexes and finger strength, shooting a gun in real life has no relation to firing one in game. Anyone who thinks that the quick progress of gun mastery seen in video games is anyway related to real life is crazy.

There are a lot of real world factors that someone who plays video games would never have to consider: weight of the gun, reloading and turning the safety off, weapon jams, wind, noise and even just the smell of gunpowder. Becoming a skilled marksman is not something that happens in one day, but can take a very long time to achieve.

Going back to video games, there is no way that someone like Lara Croft who was a novice at firing a gun , spent a few days on an island and became a master marks-woman. Or how Nathan Drake was somehow better skilled then paid mercenaries who kill for a living.

This gameplay trope is yet another example of designers fulfilling the power fantasy for the audience. Most people wouldn’t want to play a shooter where their character couldn’t hit the broad side of a barn. This is part of the popularity of the recent surge of military based multiplayer shooters, allowing gamers to run around blasting each other with weapons they would probably never use in real life.

It would be interesting to see a more down-to-earth shooter, where the characters aren’t master marksmen from the beginning and have to improve themselves. The improvement part brings up another point that I want to go over quickly. 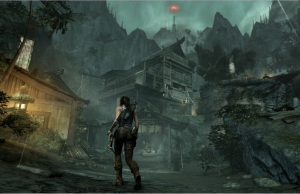 Lara Croft’s transformation from victim to master survivalist and marksman is just as unrealistic as Nathan Drake’s one-man assault on military companies.

For games that feature regular characters trying to fend for themselves such as horror titles, it is just as unrealistic as being a marksmen as having the character never improve over the course of the game.

If you were stuck fighting monsters using guns you never used before, you would start to pick things up after a few hours of fending for your life.

Let’s move on from talking about using guns to the unrealistic depiction of carrying them.

The Limits Of Magic Pockets:

In the old days of shooters it was common for the main character to have a bottomless backpack: Where they could carry shotguns, rocket launchers, mini-guns and so on with impunity.

As we moved into the last decade designers decided to crack down on this with a limit: Either two weapons total, or two weapons plus a weak backup gun. Now, while having a limit is a sign of moving forward in terms of realism, the limits in place today are still unrealistic.

Let’s get the easy one out of the way: It is physically impossible in our Universe that a handgun would somehow take up the same space as a sniper rifle in someone’s backpack/holster/whatever. The arbitrary limit on carrying weapons was supposed to force the player to make tough decisions, but it does anything but.

Most of the time you want to carry a short to mid range gun backed up by a long range weapon for sniping.  In cases where you’re dealing with heavy enemies, replace the long range weapon with something explosive. The problem with this two weapon limit is that it more often than not, restricts the player from experimenting with the variety of weapons.

Once the player has found two weapons that fit the categories that they like, there is no reason to try something else. Or even worse, the player drops a weapon and finds themselves in a position where they need it but there are none nearby. 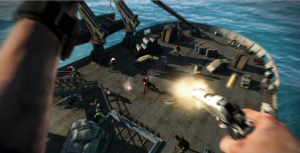 No matter how realistic looking games have gotten this generation, the act of holding, firing and carrying guns is still portrayed unrealistically.

This weapon hoarding draws a parallel to RPG item hoarding: Where the player will not use items when they need to, on fear that something more pressing will come down the line.

It wasn’t good gameplay in RPG design and the same can be said for shooters.

Playing through Bioshock Infinite, I was consistently running out of ammo for the guns I was using and trying to switch to a different gun would just delay the inevitable. Once you started upgrading specific weapons, you would be further punished for switching due to not having the advantages of the specific weapon type.

There are two realism elements to carrying weapons in real-life. First is the already mentioned fact that different weapons don’t take up the same amount of space: Especially a hand-gun which was designed to be lightweight and easily carried. There is no rational reason why someone would not be able to carry a handgun if they are already somehow carrying a missile launcher and a shotgun.

Second, for military or swat trained personal their apparel is designed to not only easily carry the weapons they need, but also secondary items like additional clips, grenades and any backup weapons.  The low ammo counts we see in a lot of modern shooters contradict the amount of ammo someone going into a dangerous situation would carry.

Another aspect is the fact that many games seem to go “gun crazy” putting in multiple assault rifles, shotguns, pistols etc that the bad or good guys would use. In any standard police or military outfit, everyone is usually outfitted with the same high quality weapons and having a six man group using six different weapons doesn’t make sense.

Up Next: Limiting Reality