In the past, I and many other people have talked about the issue of “male gaze” in the industry. Where a game’s style and art design favored the male perspective. This could be anything from having camera angles purposely aimed at certain areas of the women’s bodies, or a world where every woman’s clothing options consists only of a 2-piece bikini.

The male gaze also has to do with the design of male characters: where the men appear without shirts on and overly muscular. These instances while defended by men as supposed eye candy for women play into the concept of the male power fantasy: Where there is a land where powerful men are adored by incredibly beautiful women.

Bonus points if this world is some uninhabitable landscape where the men need to wear protective clothing, but the women are still free to strip down.

The double standard of art design is one that always annoys me about a lot of games these days as it feels like conflicting art styles in my opinion. In Diablo 3 for example: The men wear more and more armor as they get stronger, while the women seem to wear less.

This is where the male gaze issue seems to be at its strongest and where I have to side with people wanting more gender diversity. 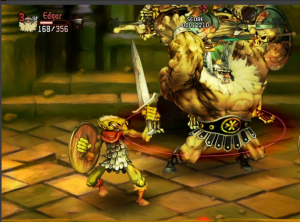 Bringing this back to Dragon’s Crown, at first I didn’t feel that this is a clear-cut example of a game being completely designed for the male gaze audience as other more infamous examples were.

Vanillaware’s art style over the years has always been about overly exaggerated design, for both genders.

Now, before someone comments on that last statement, I want to clarify and state that I don’t mean that the art style was an example of good female character design, but that their style was consistent. Going back to my point about male gaze, in those games the style of the game clearly was from the male point of view.

With Dragon’s Crown, if the men were anatomically correct and the women were left as they were, I would be putting my foot down completely in the male-gaze opinion. But with the overall design of the art style I felt like Dragon’s Crown was the lesser of the evils when put next to other examples of male gaze.

However “lesser of the evils” still put it on the side of over-sexualizing. Watching footage of the sorceress in action, they are definitely making her sexualized for male-gazing. The use of “jiggle physics”, was 100% male gaze no questions asked and how her flying animation was basically posing in mid-air.

Animations and art style are two separate parts of art design which in this case combined were an example of male gazing. This is where the people who are complaining about the game’s art design have it right. While I’m in no position to tear apart someone’s art, the animations for the sorceress just put it too over the top. 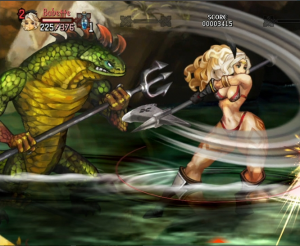 But the over exaggerated features still looks unappealing to me.

Personally I don’t find over-exaggerated features sexy: whether that is as simple as someone in real life getting massive amounts of optional cosmetic surgery, or the design of the women in Dragon’s Crown.

And in that regard I feel like Dragon’s Crown is a step backward from previously designed Vanillaware titles.

Even though those games featured exaggerated designs, they were at least made to be somewhat plausible given the physique of the characters. While there is a unified style to Dragon’s Crown, I personally don’t think it is an appealing unified style.

A better example in my opinion would be the character designs of Borderlands 2. They were not aimed at being realistic, but were still kept plausible within the overall character design.

The one positive to come of this debate is that more men and women are questioning how much over sexualized design there is in the industry. And if that means we’ll see less extreme examples such as the new Tomb Raider or Ellie from Last of Us, then that is at least a positive step forward.

There are plenty of examples of beauty in real life that don’t involve people looking like Kratos from God of War or Ivy from Soul Calibur and the industry should be embracing diversity instead of wish fantasy.

This piece was written several months before Dragon’s Crown was released in the US, here is my analysis of the game.

Addendum: For another piece about male gaze design, here are my thoughts on one-sided sexism.